We’ve been receiving tons of requests month after month to analyze and test about everything remotely connected to police boots. So, we’ve decided to make a special line of ultimate guides for pretty much every request in our mailbox.

Hundreds of e-mails were about finding the best waterproof police boots, and here we are, writing our 5th update on the topic. Spoiler alert – similar to a number of other categories in which we rate duty boots, one pair has been “stomping” the competition and dominating – it’s the BATES GX-8. The most important thing here is knowing to tell a difference between waterproof and water-resistant boots.

Waterproofing the boots means no water is allowed in (or, at least, shouldn’t be) while water resistance offers very limited protection. Morning due is OK for water-resistant police boots, but try walking in puddles and you’ll feel the damage.

Top-rated in this update

Bates GX-8 continues its uncontested reign over this category with 5.11 Storm and Under Armour Speed Freek trying to catch up update after update.

The Freek and 5.11 Storm just switched places compared to the last time, but they still haven’t managed to jeopardize Bates’ top position. We’ll see if some new models appear in the next two months, or if one of the runner ups actually manages to dethrone the GX-8.

But let’s leave that to the future and deal with the matters at hand.

We have a lot of new info to share with you, even though our list of winners might convince you like there was nothing happening in the last two months. There’s always something happening at SoleLabz. Stick around and you’ll see what I mean. Let’s go over some fresh PROs users shared with us:

Overall Rating of the GX-8 A quick rundown of basic facts:

The final category and overall ratings of the Speed Freek 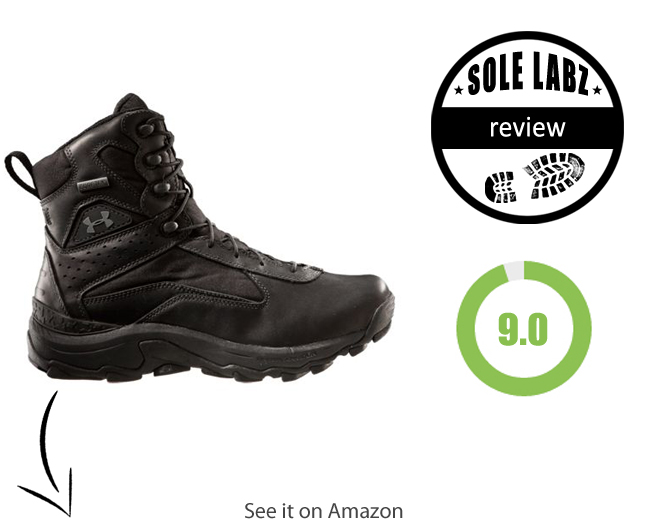 Let’s see what Under Armour had to say about these GTX waterproof police boots:

Here’s what the customers liked about them: This was such a requested topic (and still is) I hope you enjoyed what the last two months had to offer to this category.

We’ve gathered new user reports, some good but also the bad; we’ve tested Under Armour Speed Freek one more time (just in case). We had one of our featured testers take it through a medium Fairbanks trail. You’ll be able to read more about that in an article shortly due for publishing.

Solelabz.com is a participant in the Amazon Services LLC Associates Program, an affiliate advertising program designed to provide a means for sites to earn advertising fees by advertising and linking to amazon.com.
Best boot dryers – TOP 3
Best winter police boots - reviews of TOP 3