All You Need To Know About Tactical Boots

There’s a saying that a lie would be halfway around the world before the truth even gets its boots on. All we can say about it is that the truth probably doesn’t know how to pick a good pair of boots.

So yes, we finally gave in to your requests, and decided to write the ultimate guide on tactical and combat boots. We know we’ve been postponing this for a long time now, and we apologize, but it’s only because we wanted to take our time and present a guide that’s going to answer all of your questions.

Time to make good on our promise, right?

Here is what you can expect to learn in this guide:

Before we tighten up those laces and start stomping around, let’s take a moment and check the inner-workings of our feet.

The human foot is an intricate mechanism of:

In their fragile complexity, they act as a propulsion enabler for our entire body as well as shock buffers.

Any footwear is an addition that’s man made, so we want it to be as less obtrusive as possible. The best way of avoiding that “I just dipped my feet into cast concrete” feeling is getting the best boots for the occasion. If every day (ED in the further text) is the occasion, a well-chosen pair of tactical boots might be your best bet.

Because these boots are built to protect your feet under extreme stress, so imagine what what they can do for you in ED “gentle” conditions They’re not strangers to civilian feet for a long time now thanks to their unique combo of light weight, comfort and optimal protective properties.

Tactical and other types of service boots are designed for rocky terrains, so a good fit that cradles your feet and support your ankles, probably like no other boot, is a must fit these boots. How the sole supports your feet in tactical boots

Tactical boots are your top choice if…

Here are some situations where IMO a good pair of tactical boots should feel as “home”:

Tac boots and the great outdoors

You now have a specific set of criteria that will help “hide” your Achilles heel and allow you to get the most out of the grand outdoors.

“One size fits all” is a pipe dream when it comes to tactical footwear.

The terrain you’ll be facing in your activities is what generally tells you what kind of boots suit you. We’ll talk different types a bit later; I’ll just give you some options to illustrate a point.

What is your “playground” exactly:

You see where I’m going with this, right? Mismatching your surroundings and footwear will come back and bite you sooner or later so pay close attention once we start laying out the options to choose from.

It’s a very wise practice to account for the weather you’ll be encountering during your time out.

We’re talking extreme heat and cold, precipitation and other calamities your area might be known for. Simply put – when choosing a tactical boot, you’ll have to think about your daily routines.

Let’s get a bit more specific

Waterproof tactical boots are, most of the time, your best bet. They’ll keep most of the potential scenarios well covered. GTX (Gore-Tex) is a Teflon-coated membrane riddled with millions of microscopic openings in charge of keeping your feet perfectly dry. It’ll keep the outside moisture where it belongs, but also get rid of the sweat from within the boot. This makes it a viable choice even in warmer climates.
GTX should be kept away from direct sunlight if possible. Prolonged exposure will deteriorate the boots and cause a temperature build-up. 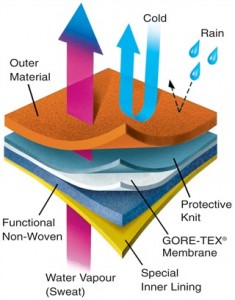 Let’s take a look at these bad boys inside and out.

Uppers of the boot

Upper is the whole top portion of the boot. The materials it’s made of directly affect its weight, breathability, durability and abrasion/water-resistance.

Most of the time – the uppers are made of:

They improve the cushioning, act as shock buffers and determine the overall stiffness of the boot.

They’re usually made of one of the two materials:

It’s the modernization in the materials used that allowed for the boots to be used even for hiking – you can see some of the similar models listed as top-rated women’s hiking shoes.

Soles for tactical boots are mostly made of rubber. Some other materials such as carbon might be added to provide extra stiffness, but that’s not a regular occurrence.

Vibram soles are a high-quality option made in Italy and have almost become an industry standard. Their main benefits:

So, if you see that yellow “Vibram” emblem on the bottom of the shoe, it’s definitely a good thing.

Some additional aspects of a quality tactical boot worthy of our attention are:

Choosing the right fit in a tactical boot

In my book, a tight fit is simply asking for trouble.

I know it’s being advocated left and right, but nobody counts for the fact that our feet naturally swell throughout the day. Not to mention the stress from the activities. All this calls for a bit of extra room in our boots unless we’re really going for an all out blister bonanza.

Some of the common conditions caused by tight footwear choice:

Plantar Fasciitis and the choice of tactical/hiking boots

Of the ones listed above, Plantar Fasciitis is the one condition that deserves some special attention because it’s pretty common in “serious” hikers and one that’s the most impairing. In a word, it’s condition brought on by an inflammation of a tissue band at the bottom of your foot. The fascia that connect your heel to your toes gets inflamed in results in a stabbing pain in the heel or a consistent and dull pain. The pain is worst in the first few morning steps. A few rules of thumb to choose a tactical or a hiking boot that will prevent Plantar Fasciitis:

Checking the fit of the boot the right way:

Another great tip is to go shopping later in the afternoon. As I’ve already said, our feet WILL swell during the day so boots bought that were a perfect fit in the morning might be squeezing the life out of your feet by the end of the day.

types of tactical/military boots to choose from

Now we’re getting to the specifics. Here are the most common options:

These are your basic iteration of army boots. They’re waterproof and made of black leather that’s usually hardened. The overall design is envisioned with extra ankle/foot stability in mind. In other words, they’re made to handle rough terrains you’ll usually encounter in training or combat. Additionally, this type of tactical or combat boots is pretty universal and can be used as a comfortable hiking boot.

Their roots go all the way to Ancient Rome when they used to be known as caligae.
They are your regular army boots, a Jack-of-all-trades of sorts and all the prerequisites I listed above apply to these as well. The military is very picky about the brands they allowed as “standard” issue, they cchoose brands with the highest standards, like Danner.

Nicknamed “paratrooper boots”, they’re a standard piece of equipment for parachute units since the 1940s.
They feature a number of reinforcements, the most important of which being in the ankle area. Tall shanks are reaching the calf, heels are “airborne optimized” and the soles are rubber. Toe caps are later added for additional protection.

You might hear them being called “Corcorans”, nicknamed after the original manufacturer.

If your outdoor scenario includes frequent jumps and overly uneven terrains, these will provide all the necessary support and protection.

Developed after General George S. Patton, Jr. established Tank Corps in the US to fit the specific needs of a tank crew.
They don’t have laces, rather, they feature leather straps. Meaning, there’s nothing to tangle with the moving parts of a tank, or tree roots, branches, wild foliage… They’re also very heat-resistant, so everything short of napalm is no sweat. The package also includes the gusseted tongue, steel toe guards, steel or plastic guards for heels and shanks, as well as metal inserts.
So, if you find yourself in a forest-heavy area packed with step-impeding branches and tree roots, you want a pair of these babies. They also handle sharp rocks well due to the assortment of steel reinforcements.

We have three different options for inhospitable climates:

Few FINAL TIPS – Test your boots on the spot!

If you’re not ordering online, you can take a couple of extra steps to make sure you’ve found your match made in heaven.

Here’s what I’m talking about:

If You are buying online – read reviews of the boots

Shopping for any footwear online is not what it used to be. Today, there’s plenty of information that you can use to made a decision. And who is a better source then the people wearing the boots you have your eye on.

The advice I can give you here is pretty obvious – take your time, read what other people are saying about the tactical or combat boots in their reviews and, especially, read the “small print” about the fit. Be diligent and find a person that wears the exact same size as you and read if they have to say something about the fit and the comfort of the boot. If you approach the task carefully and get your information from trusted sources, there’s very few ways to go wrong.

You are officially ready

To get out there and make an informed choice about the best tactical boots for whatever purpose you have in mind.

I hope my guide helped out, and I will direct you to a bunch of other articles I’ve written on the topic in the upcoming posts. You can check out some specific models and see which of them suit you the best. I always have that feeling I should say something smart about boots or shoes at the very end, so here it goes…

Before judging a man, try walking a mile in his shoes. What happens after? Who cares? He’ll be a mile away, and you’ll still have his shoes 🙂

Solelabz.com is a participant in the Amazon Services LLC Associates Program, an affiliate advertising program designed to provide a means for sites to earn advertising fees by advertising and linking to amazon.com.
Teva Women's Omnium Sandal - is this the best women hiking and trekking sandal ever made?
6 reasons why using trekking poles is a must