Review of Under Armour Valsetz RTS

Under Armour dishes out slews of bombastic motivational slogans to go with their tactical boots. “Cool factor” has always been one of their main focuses, if we’re honest. And this boot is among top 3 Under Armour tactical boots today.

This is without a doubt, one of our favorite boots of its type and possible in a broader chunk (beyond tactical). And for most of us working on this site, it is THE favorite shoe. Period.

The Valsetz is our top pick in a slew of categories – from top-rated police boots to the the top picks among all tac boots to ED footwear.

We might argue they come off a bit corny from time to time, but one particularly resonated with me. It says: “Go where you don’t belong”.

A few photos from the field testing of the UA Valsetz RTS:

SoleLabz began as a simple site about hiking boots and shoes we’ve personally tested; that’s it. We first stepped out of our comfort zone with a pair of Under Armour Speed Freek boots; the rest is history. The boots themselves “went” where they didn’t belong and took us on a joyride that lasts ‘till this very day. Today, some of the best known names in the preparedness arena (including some veterans) are our featured testers.

Video review of one of our featured testers, JJ Johnson of RealitySurvival.com:

Anyway, let’s quit romanticizing over tac boots, and take another look under the hood of Valsetz RTS.

What changed since the last update?

Under Armour tactical boots make for the most “boring” reviews updates. You don’t ever see any seismic shifts in grades or user satisfaction… Come to think of it that might be a good thing after all. As we mentioned, the UA Valsetz Side-Zip, the Valsetz RTS and the Speed Freek are in the TOP 3 best rated UA tac boots on the market.

Here’s what changed in the UA RTS ratings:

Back to reviewing basics for tactical boots….

what you’ll learn in this review:

That’s what lies ahead, so let’s get cracking! Or, “Slay the next giant”, as Under Armour would put it… 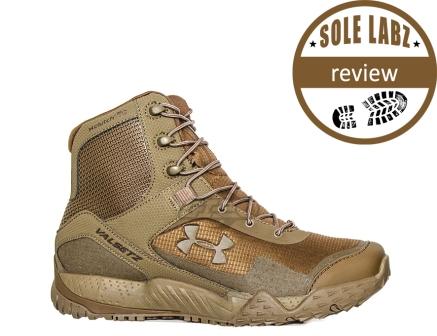 Basic info on the Valsetz directly from Under Armour:

Let’s see what we’re working with:

That’s exactly what we expect from Under Armour tactical boots specification. Cool-sounding patented technologies and bold statements, sealed with a lot of Thermoplastic Polyurethane (TPU). They do a lot of good advertising, but this boot is not just sparkles, it’s the real deal.

PROs from the user reviews of the UA Valsetz

Final thoughts on the review of UA RTS

This top rated model took a number two spot on our “Best Under Armour tactical boots” guide. That says volumes right there. And as we mentioned, that didn’t change much with this update or with a number of previous updates for that matter.

Our featured testers and customers agree they’re one of the lightest (at incredible 15.5 oz they weigh like tennis shoes) and most comfortable tactical boots out there. They’re also highly ventilated, eliminating perspiration and blisters. Breathability makes them dry much quicker than any other tac boot out there, making them a great choice even for wet terrains.

As with Valsetz side zip, they’re used by people in a wide variety of occupations. It ranges from hikers, through firefighters to soldiers. It’s also the best-rated light police duty boot for a number of rating updates now.

They’re not waterproof, but water-resistant and some people found issue with that, which is not really fair because being completely waterproof means GoreTex and pig skin (most often) and that adds weight. That’s not what the RTS is about, it’s about being light on your feet.

They’re also hot weather tactical boots, so I wouldn’t advise playing in the snow with them. The noise is something we just figured out in this update, so be warned if that sort of thing bothers you. All the advantages of this model are tied well together by a competent and responsive Under Armour customer support, reasonable price and a lifetime warranty. 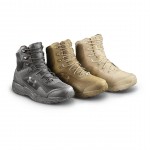 Solelabz.com is a participant in the Amazon Services LLC Associates Program, an affiliate advertising program designed to provide a means for sites to earn advertising fees by advertising and linking to amazon.com.
Best lightweight tactical/combat/army boots
Review of Under Armour Speed Freek 7 inch Tactical Boots