Taking a shoe-making principle and applying it to tactical boots? Why would one do that?

Because you want to pioneer the next gen of tactical footwear, maybe. Under Armour does just that with this tac boot. 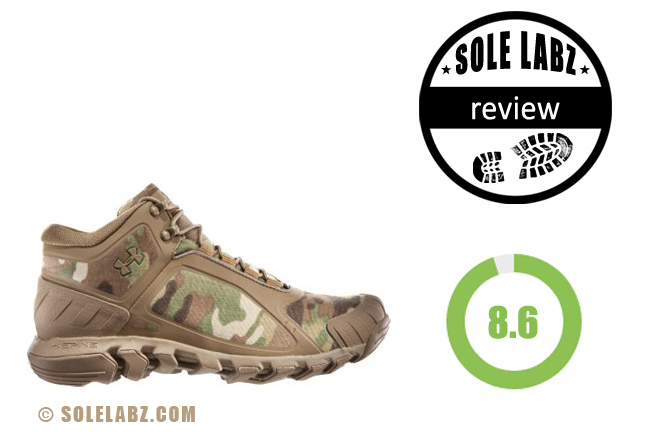 To cut the long story short, UA Spine was a technology primarily reserved for running and sports shoes. Under Armour decided to apply it to their combat boots at some point, and the result is standing in front of us today.

After reviewing all things Valsetz, we’ll finally dive into dissecting these Under Armour spine shoes/boots.

Boom or bust for the hybrid approach?

Only one way to find out. Let’s see what makes them jump out of the crowd (if anything).

There are a lot of hoops these combat boots will have to jump through before reaching their final grade from SoleLabz.

The process of reviewing:

SoleLabz Overall Ratings is formed by combining all those factors and chewing it down to a single number.

In other words, we crunch boring data and ratings, so you don’t have to.

You’ll see a fraction of that process here, namely:

You’ll be able to hear it from our testers as well in a separate review: 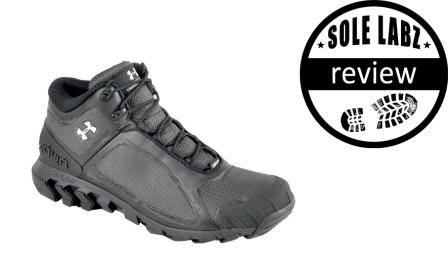 Here’s the DNA of this tactical model, as Under Armour likes to put it:

Positive reviews as per verified customers:

Here are some CONs users shared in their online reviews:

Since the users already said all that needed to be said about the performance of these bad boys from Under Armour, we’ll focus our closing argument on the creativity part.

Their structure is based on foam, designed for efficiency and light weight. Its purpose is to provide support to the athletes in places where they need it the most. That’s why I’ve told you it was first incorporated in shoes and slowly drilled its way to tactical boots. The cored-out overall construction maintains a healthy balance between rigidity and flexibility.

It holds its supportive shape at all times while moving as one with the foot. That’s that “second skin” feeling we’re always talking about.

How does Under Armour Spine work?

Paired with Micro G cushioning, Spine tech is a “reactive” structure of sorts. It “follows” the movement of the wearer and provides support once it’s needed.

Other Under Armour shoes containing Spine Technology are (for example):

The notable appearance of UA Spine Highlight ST is the walk-off homer of Bryce Harper for the win over Pittsburgh Pirates.

It’s like Tactical boots borrowing GoreTex from hiking shoes and boots. Now combat boots incorporate technologies from running and sports shoes. It’s all one big pile of possibilities, and we’re all mixing them up to make the best footwear imaginable. This one is not one of the best rated Under Armour boots (like Valsetz or Speed Freek), but it has a unique appeal to people with very specific boot-needs (yeah, that’s a word now).

I hope this review helps you decide.

The bottom line is, these tactical boots work like a charm while being the epitome of creativity at work. 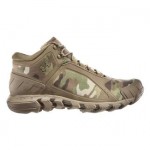